NOVEMBER 14, Budapest > [adaptable city 8] Népszínház utca, where does it lead? Thoughts from The Hague 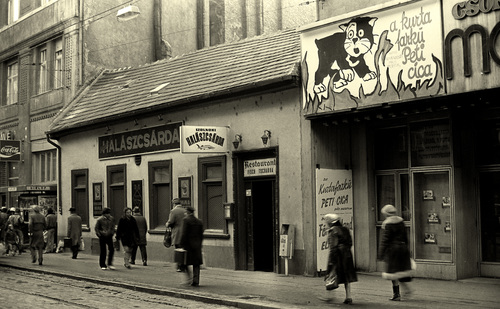 Népszínház utca is among the most controversial streets in Budapest. Traditionally the first stop of recent immigrants to the city, the street accommodates a variety of ethnic groups, without being able to profit from its cultural diversity. While the Teleki tér neighborhood has been improved with the establishment of new cultural and social spaces as well as with a new, community-designed public park, the commercial street’s fame is overshadowed by its neglected public spaces, derelict buildings, empty shops and tangible social conflicts.

The workshop organized on November 14 by the Hungarian Contemporary Architecture Centre and Roeveld-Sikkes aims at bringing together local organizations, planners, designers, decision-makers and international experts in order to study the street’s possibilities, to elaborate visions for its future and to identify its potential transformation scenarios, addressing the following questions: What planning, design and financial tools can be used for the revitalization of the street’s commerce? What is the role of local businesses, traditional crafts and restaurants in Népszínház utca? How can revenues from tourism be reinvested in the neighborhood’s infrastructures and services? How to preserve the street’s diversity and to appease social conflicts in the same time?

In the course of the workshop, participants get acquainted with the regeneration process of a commercial street in The Hague, and analyze the problems and possibilities of Népszínház utca, focusing on innovative coalition formats, regulating frameworks, the advantages and risks of thematic streets, and rehabilitation financement models. The purpose of the workshop is to elaborate development scenarios that offer perspectives for improving the street’s commerce, reusing the street’s empty shops, engaging residents as well as social and cultural actors, initiating services for locals and tourists, and enhancing the street’s attractiveness.

The workshop’s guests are Manish Dixit and Hedwigis Verheijen (Hague Municipality), protagonists of the regeneration of Hague’s multicultural Paul Krugerlaan.

Ir. Manish Dixit started his career nearly 20 years ago as a real estate developer. He has been responsible for the development of many sites which included large scale developments in housing and commercial real estate. In the past eight years he has been involved in the development and implementation of strategies for transforming poorly functioning urban areas. He works in a participative approach, emphasizing the socio-economic vitality of urban areas in which physical transformations form a supportive role.

Hettie Verheijen has been working for 23 years in various jobs in the fieldof urban development and public space. In her current role as Area andproject manager of the Urban Development Department of the Municipalityof The Hague, she coordinates in the Transvaal area (including PaulKruger Avenue) all physical projects with affinity to real estate development, public space, traffic and economy. Here she is theintermediate between the municipality, various specialist departments and external stakeholders (owners, developers, residents, etc.)

The Paul Krugerlaan is a street in the Transvaal quarter in the city Of The Hague. It was built in the early 20th century as a residential street. Within a decade the houses on the street level were slowly transformed into shops. In the 1980’s, the first immigrants from Suriname, Turkey And Morocco started taking over businesses. By the turn of the century the street had about 150 shops, predominantly from a migrant background. The real estate of these shops is owned by more than a hundred different people/companies, many of them just interested in collecting the rent and not investing. By the turn of the century, there was a major decline in the physical appearance of the street, there was hardly any diversity, low quality of entrepreneurship, poorly functioning shopkeeper’s association and declining number of visitors. In 2009 a radical integrated approach was implemented to target various issues and to stop the vicious circle of urban decline. Today the street has found it’s way up and in the recent past has attracted experienced entrepreneurs, new shopping and food formulas.