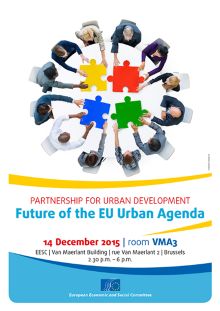 Following the lead of the upcoming Dutch EU Presidency, the European urban policy community is actively working on the preparation of an Urban Agenda. The aim is to promote cooperation between European, national and city level representatives and stakeholders so as to stimulate growth, liveability and innovation. In order to better understand how to engage civil society organisations, the Dutch Presidency invited the EESC to express its opinion on this issue.

It is within this context that the EESC is organising a public hearing on Partnership for urban development – Future of the EU Urban Agenda. The purpose of the hearing is to gather suggestions from representatives of civil society organisations as well as experts in the field of urban development, and discuss them with institutional representatives in view of channelling findings into the EESC’s opinion. The event will take place on 14 December 2015 from 2.30 p.m. at the EESC’s premises.

Roman Haken, Rapporteur of the opinion “Future of the EU Urban Agenda”, EESC