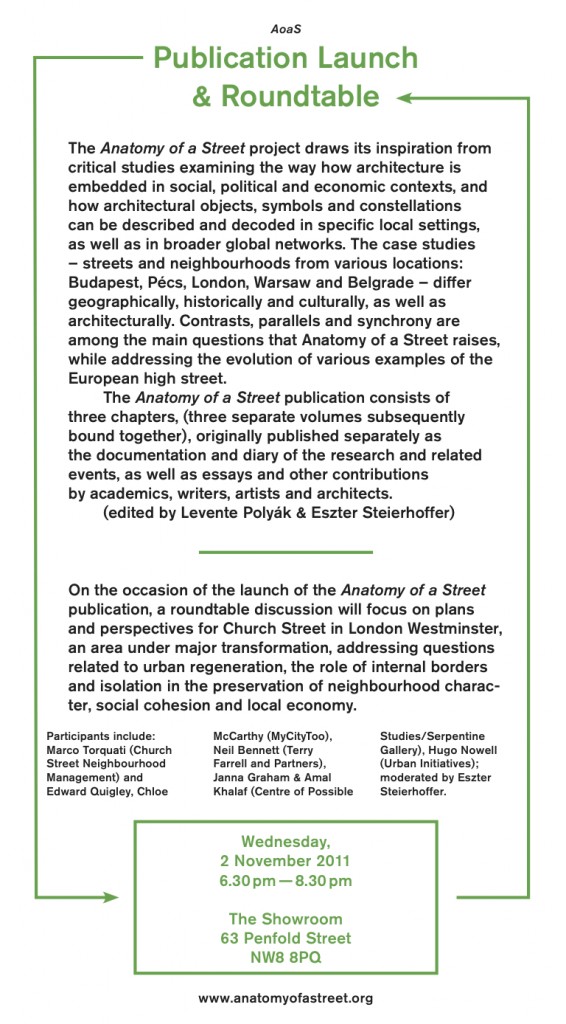 The Anatomy of a Street project draws its inspiration from critical studies examining the way how architecture is embedded in social, political and economic contexts, and how architectural objects, symbols and constellations can be described and decoded in specific local settings, as well as in broader global networks. The case studies – streets and neighbourhoods from various locations: Budapest, Pécs, London, Warsaw and Belgrade – differ geographically, historically and culturally, as well as architecturally. Contrasts, parallels and synchrony are among the main questions that Anatomy of a Street raises, while addressing the evolution of various examples of the European high street.

The Anatomy of a Street publication consists of three chapters, (three separate volumes subsequently bound together), originally published separately as the documentation and diary of the research and related events, as well as essays and other contributions by academics, writers, artists and architects. (edited by Levente Polyak& Eszter Steierhoffer)

On the occasion of the launch of the Anatomy of a Street publication, a roundtable discussion will focus on plans and perspectives for Church Street in London Westminster, an area under major transformation, addressing questions related to urban regeneration, the role of internal borders and isolation in the preservation of neighbourhood character, social cohesion and local economy.