The Municipality of Budapest and the Hungarian Contemporary Architecture Centre proudly presents the first event of the Coming Soon! Project Gallery: 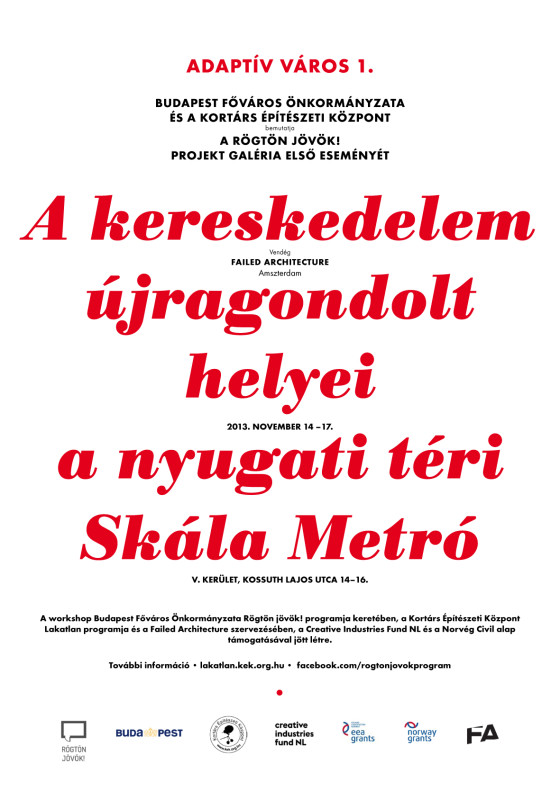 The Failed Architecture Workshop takes place in the framework of the 6-month series organized by Lakatlan Budapest (KÉK) presenting Dutch approaches to vacancy, supported by the Creatieve Stimuleringsfonds NL.

Failed Architecture aims to open up perspectives on urban failure and dubious architecture, from what it’s perceived to be, what is actually happening and how it’s represented to the public. FA believes that there is a demand for more holistic, 360-degree observations that lay bare the downsides of urban development and architecture instead of just looking at the physical results produced by architects. Next to an ongoing online exploration and live lectures and debates, FA conducts research workshops on site. These have been carried out in a variety of cities, amongst which Berlin, Nottingham, Sofia, Tallinn, Porto, Copenhagen and Belgrade.

The aim of the workshop is to understand the context and path-dependency of a particular building, neighbourhood or urban phenomenon, which is considered to be problematic. Together with a group of participants, FA performs a multiple-day research that breaks down the history of the specific case. By analyzing different layers that influence it – the built environment, the social context, the economics, the reputation and the politics – a physical timeline is created. The timeline shows the history of the case from various, interconnected angles.

The participants conduct the research with FA’s guidance, the input of local experts and their own investigations. This includes lectures, desk and archival research, interviews and field analysis. The timeline is the basis for further discussion about the challenges and constraints, but most of all the potential of the alleged problem.

In Budapest, the Failed Architecture Workshop will address the Skála Metró building and its environment at Nyugati Square. The building, once the most modern department store of the city, has been witnessing the transformation of commerce and shopping habits, the changing significance of neighborhoods, the decline of building technologies and types. The workshop inaugurates the 6-month series organized by Lakatlan Budapest (KÉK) presenting Dutch approaches to Vacancy.