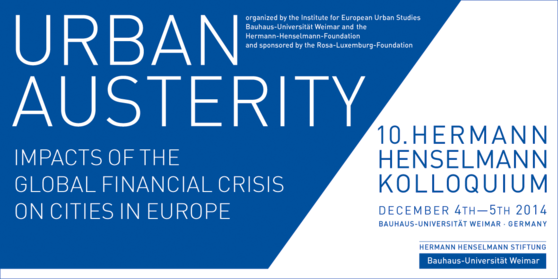 The international conference “Urban Austerity: Impacts of the global financial crisis on cities in Europe” will be hosted by the Institute for European Urban Studies at Bauhaus-Universität Weimar from Thursday 4th December to Friday 5th December 2014. The conference seeks to promote an interdisciplinary debate that discusses regulatory restructurings under a new regime of austerity urbanism and reflects on the role of urban social movements struggling for progressive alternatives. In the first part of the conference we will bring in academics, practitioners, and political activists from Greece to share their research and experiences. In the second part, we will invite contributions from established academics, early career researchers, graduate students, critical governors, and political activists on a broad range of urban topics focused on but not limited to the regions most affected in Southern and Southeastern Europe.